Getting Started with Telepresence on Windows

Telepresence is a powerful open source tool that allows you to code and test a service locally against a remote Kubernetes cluster. This allows you to quickly build and debug a local service that is dependent on a large number of remote services and resource-hungry remote middleware or databases. Telepresence is now available in developer preview for Windows and in this guide, you will learn how to install Telepresence and create an “intercept” to route traffic from your cluster to your local environment on Windows machines.

This article assumes that you have your own remote cluster with an application deployed that uses the microservices architecture and you want to intercept (or re-route) traffic to a service in that cluster. If you do not have your own cluster but would like to try Telepresence you can follow this quickstart with a free demo cluster from Ambassador Labs.

In the case where you do not have curl installed you can download the install file using Invoke-WebRequest:

After the file is downloaded you’ll need to unzip it and clean it up by running the following commands:

Run the install-telepresence.ps1 to install telepresence's dependencies. By default Telepresence will be installed at C:/telepresence, but you may specify a custom path $path with -Path $path.

A prompt will come up asking if you want to change the execution policy. Enter (Y) here and the install process will continue.

Finally remove the unzipped file with:

Congratulations, you have successfully installed Telepresence on your Windows machine. Before moving on, make sure to close your Powershell and open a new one.

Connect to your remote cluster

Now that you have installed Telepresence and opened a new Powershell session, you can begin to connect Telepresence to your cluster and start intercepting your services. First make sure that you are in the correct context with the cluster and namespace of the services you’d like to intercept.

1. Use kubectl get services and make sure that you’re in the right namespace for the service you want to intercept. In my case, the “my-context” defaults to the namespace “foo” where I have my service called “quote."

2. Next run the telepresence connect command:

3. The telepresence list command will display the services that are available to intercept in the current namespace. You can add -n <namespace> to the end of the command to show services in another namespace without changing your context.

Replace <service_name> with the name of the service you want to intercept as listed in telepresence list and <namespace> with the namespace that service is in.

Before you actually intercept your remote service, you should run a version of the service locally. Make a change to your local service in order to compare with the service in the cluster.

In my example, my local instance of the quote service has a new set of quotes. My service is deployed via Docker containers so I will create a new build and run the service using docker run. 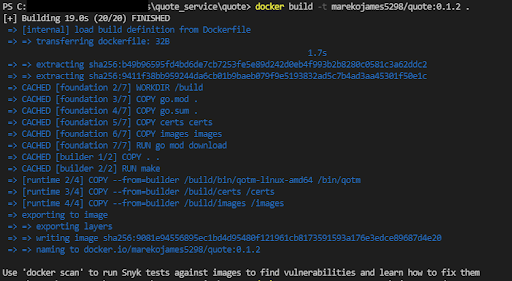 After you edit the code of your own local service, create a new build and run your service.

In order to use preview URLs you need to login to Ambassador Cloud. Run telepresence login to open your browser and login using your preferred credentials (Github, Gitlab, or Google). 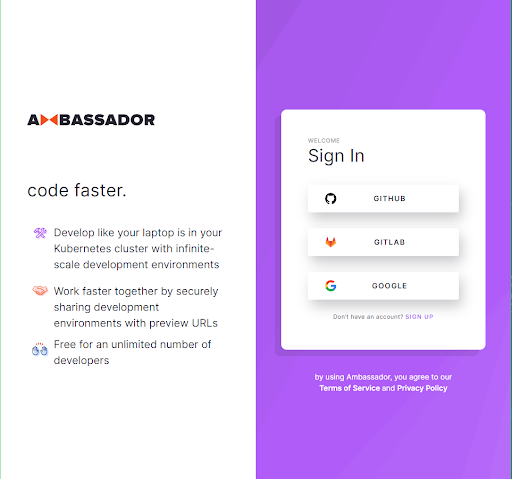 Follow the login process and return to your terminal:

After logging in, you can create a personal intercept with the following command:

Replace <service_name> with the name of your service (as listed in telepresence list) and <local_port> with the port you indicated in the previous step. 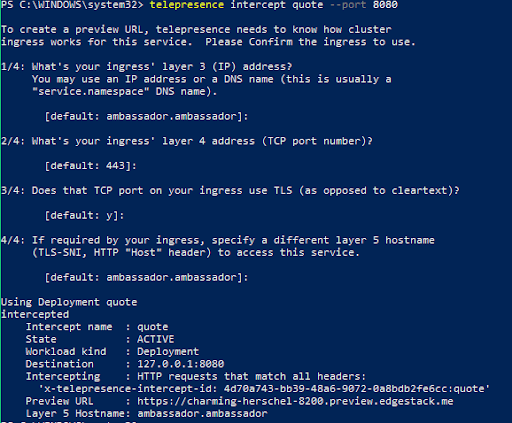 After answering the questions, telepresence will create the intercept and return a preview URL.

With the preview URL, traffic that was going to your remote service is now rerouted to the service running locally and you can test your changes as if they were already deployed in the cluster. I can access my quote service using the same prefix I normally would in the cluster.

Notice how the remote service in your cluster has been unaffected. In my example, it still returns one of the old quotes.

Telepresence’s preview URLs allow you to test and debug changes to your service without affecting the cluster or anyone else who may be working with the cluster. The preview URL can also be shared and is accessible to others, so collaboration becomes incredibly easy and simple.

Congratulations, you’ve successfully installed Telepresence and created an “intercept” routing traffic from your cluster to your local environment!

If you encounter errors while trying to create or access your preview URL, you may have configured your intercept incorrectly. Use telepresence leave <service_name> to remove the intercept and then create a new intercept again. Make sure to answer the four questions with the correct configurations for your cluster. Telepresence tries to determine these settings for you, but the given defaults may not always be appropriate for your cluster.