Much of the discussion about Kubernetes and microservices focuses on the changes in architecture: gRPC vs HTTP, service mesh (or not), observability, and so on. The official CNCF Cloud-Native definition echoes this bias:

These techniques enable loosely coupled systems that are resilient, manageable, and observable. Combined with robust automation, they allow engineers to make high-impact changes frequently and predictably with minimal toil.

While these changes are significant, this technological view of cloud-native sidesteps the fundamental change as organizations become cloud-native.

Cloud-native is a fundamental shift in software development workflow.

The traditional software development model is highly centralized. A single central application is released on a predictable schedule. This application and schedule serves as the synchronization point for every engineer in the organization. The application goes through a defined set of phases: development, code freeze, QA, user verification testing, release. Thus the entire application is in the same phase at any moment in time. 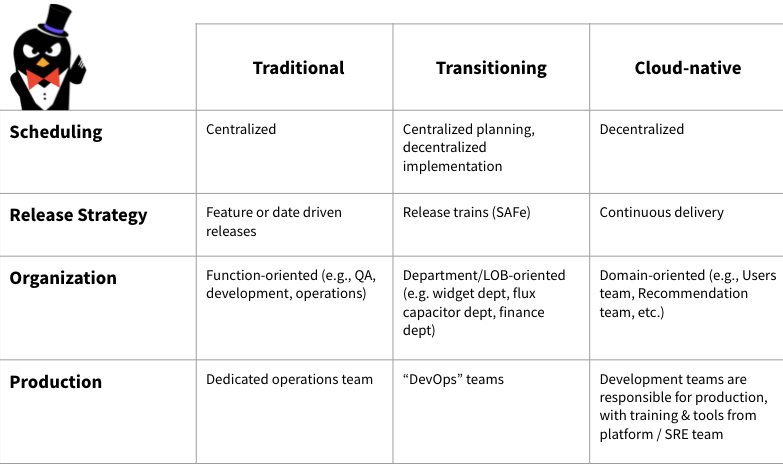 How does this impact the actual software development lifecycle? 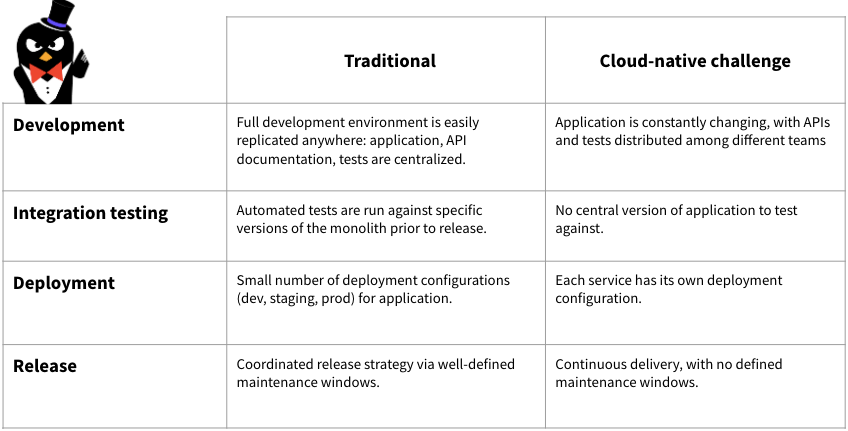 Cloud-native applications are difficult to replicate: multiple microservices, constant updates, and, increasingly, involve a heterogeneous mix of technologies. This complexity, if not properly managed, can create an enormous drag on developer productivity.

Microservices are increasingly heterogeneous in architecture as an application grows. Different languages (e.g., NodeJS for front-end services, with Golang for back-end services) are common. Some services may use a SQL database for persistence, while others may rely on a messaging systems such as Kafka. Services may communicate in different protocols: gRPC, HTTP, WebSockets. Discovering the available APIs for a given service in this environment is a challenge. A developer portal that discovers and publishes API documentation for different microservices becomes essential for development.

Mocks and service virtualization are techniques that help users emulate services without deploying the full service in an environment. These approaches simplify test environment setup, and can be used by unit and integration tests to provide an initial level of confidence in software quality. CNCF projects such as Telepresence can help in this area.

However, the changing nature of cloud-native applications makes it impossible to completely test microservices before release. This reality has led to the growing adoption of progressive delivery. With progressive delivery, updates are gradually released to production and tested with real user traffic for functional verification or synthetic traffic for regression and performance verification. This minimizes the blast radius of any failure.

GitOps is a best practice for application delivery that relies on using Git as the source of truth for the entire state of an application, including its deployment configuration. GitOps builds on the declarative configuration system built into Kubernetes itself and uses a continuous integration pipeline or in-cluster operator to synchronize the state of the environment with the declared state. By adopting GitOps, application development teams can assume responsibility for operations using a workflow they already understand (Git, pull requests).

Release is frequently conflated with deployment. With cloud-native applications, separating deployment and release is critical. Deployment is the actual process of getting a service running in a particular environment (e.g., production), while release is the process of moving production traffic to the new version of a service.

With progressive delivery, traffic is incrementally shifted to a new version. Building a observable system where the core properties of the application can be observed is critical to quickly identifying and troubleshooting any issues that arise while traffic is being shifted. Finally, engineering for resilience using techniques such as circuit breaking, timeouts, and automatic retries to protect the overall application from total failure in the event of a partial failure of an update is important. Together, these techniques enable the rapid and safe release of new versions of a service, while mitigating the impact of any failure.