A cloud-native app architecture that is composed of a number of microservices working together forms a distributed system. Ensuring the distributed system is available--reducing its downtime--necessitates increasing the system’s resilience. Resilience is the use of strategies for improving availability. Examples of resilience strategies include load balancing, timeouts and automatic retries, deadlines, and circuit breakers.

One of the primary goals of resilience is to prevent situations where an issue with one microservice instance causes more issues, which escalate and eventually lead to distributed system failure. This is known as a cascading failure.

Resilience strategies for distributed systems are usually employed at multiple layers of the OSI model, which is shown in the graphic. For example, the physical and data link layers (layers 1 and 2) involve physical network components, like connectivity to the Internet, so the data center and cloud service providers would be responsible for selecting and implementing resilience strategies for those layers. 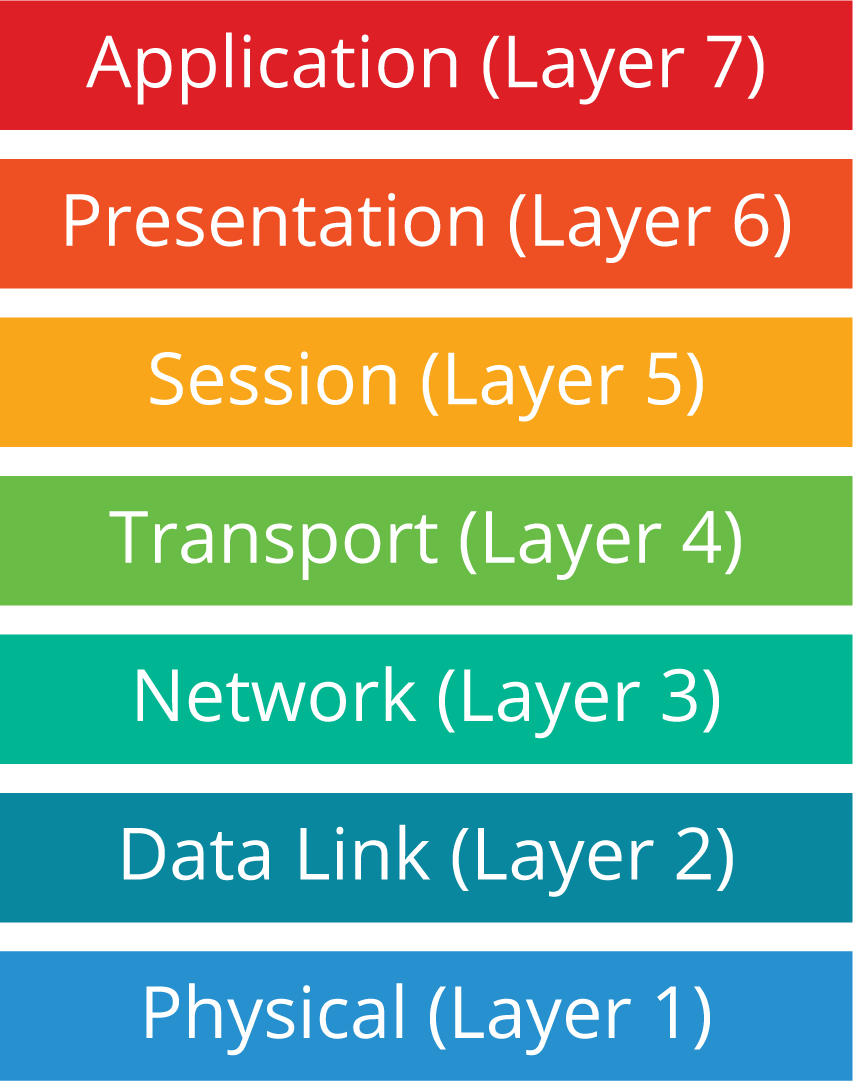 The application layer is where applications reside; this is the layer that human users (as well as other applications) directly interact with. Application-level (layer 7) resilience strategies are built into the microservices themselves. An organization’s developers could design and code an app so it will continue to work in a degraded state, providing vital functions, even when other functions have failed due to bugs, compromises, or other issues with one or more of the microservices.

An example of this type of functionality can be seen within the recommendations functionality on popular video streaming applications. Most of the time the home page contains personalized recommendations, but if the associated backend components fail, a series of generic recommendations are shown instead. This failure does not impact your ability to search for and play a video.

The transport layer (layer 4) provides network communication capabilities, like ensuring reliable delivery of communications. Network-level resilience strategies work at layer 4 to monitor the network performance of deployed instances of each microservice, and they direct requests for microservice usage to the best instances. For example, if a particular microservice instance stops responding to requests because of a failure at its location (say, a network outage), new requests would automatically be directed to other instances of that microservice.

For Kubernetes, layer 4 load balancing is by default implemented using kube-proxy. It balances the load at a network connection level. The management of Pod IP addresses and routing of traffic between virtual/physical network adapters is handled via the Container Networking Interface (CNI) implementation or an overlay network, such as Calico or Weave Net.

There are many algorithms for performing load balancing. Let’s take a closer look at three of them.

In practice, load balancing algorithms alone often don’t provide enough resilience. For example, they will continue to send requests to microservice instances that have failed and no longer respond to requests. This is where adding strategies like timeouts and automatic retries can be beneficial.

Timeouts are a fundamental concept for any distributed system. If one part of the system makes a request and another part fails to handle that request in a certain period of time, the request times out. The requester can then automatically retry the request with a redundant instance of the failed part of the system.

There’s no guarantee that retrying a request after a timeout will succeed. For example, if all instances of microservice B have the same issue, a request to any of them might fail. But if only some instances are affected--for example, an outage at one data center--then the retry is likely to succeed.

Also, requests shouldn’t always be automatically retried. A common reason is to avoid accidentally duplicating a transaction that has already succeeded. Suppose that a request from microservice A to microservice B was successfully processed by B, but its reply to A was delayed or lost. It’s fine to reissue this request in some cases, but not in others.

The figure below depicts this scenario. Suppose that microservice A needs a reply to its request within 2.0 seconds. With a deadline, the time remaining to fulfill the request travels with the intermediate requests. This enables each microservice to prioritize the processing of each request it receives, and when it contacts the next microservice it will inform that microservice how much time is remaining. 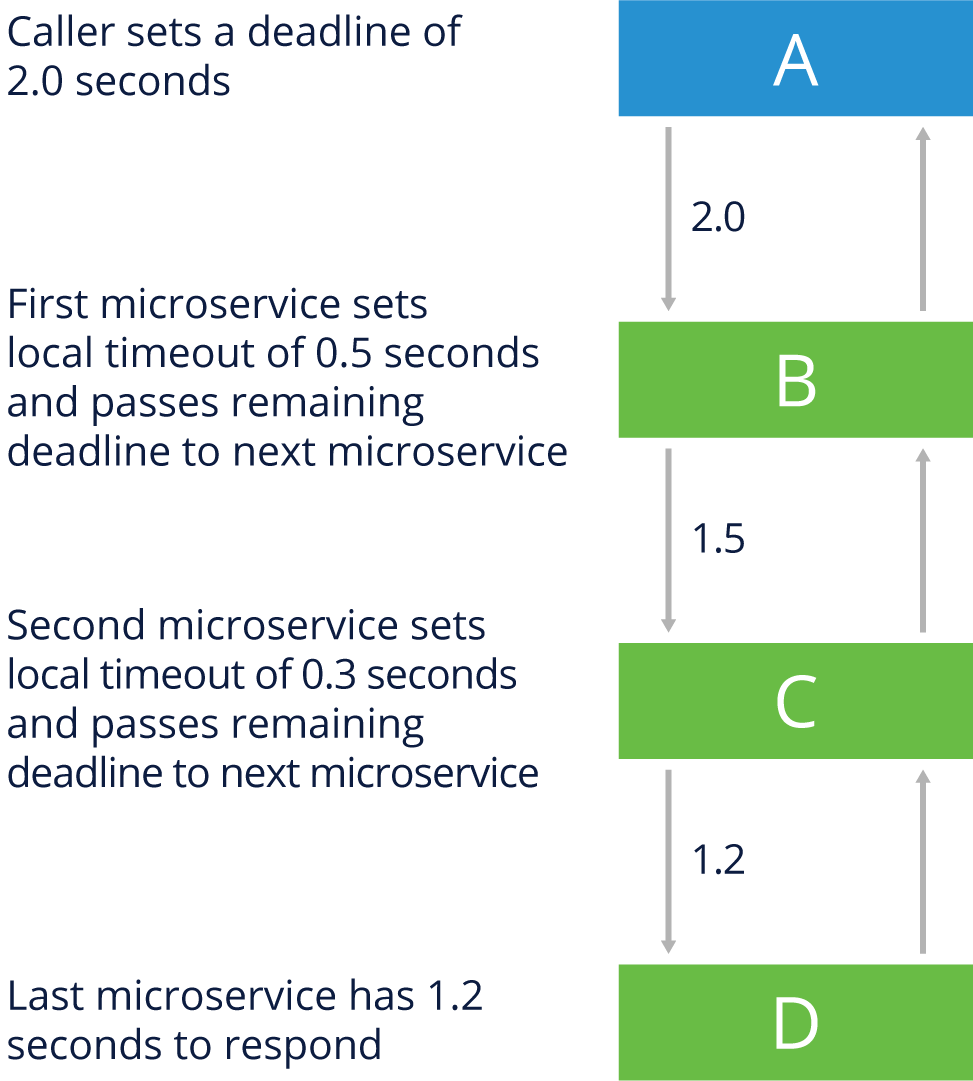 Timeouts and deadlines address each request and reply within the distributed system individually. Circuit breakers have more of a “big picture” view of the distributed system. If a particular instance of a microservice is not replying to requests or is replying to them more slowly than expected, the circuit breaker can cause subsequent requests to be sent to other instances.

Cascading failures often start because of automatic retries directed at microservice instances experiencing degradation or failure. Suppose you have a microservice instance that’s overwhelmed with requests, causing it to reply slowly. If a circuit breaker detects this and temporarily stops new requests from going to the instance, the instance has a chance to catch up on its requests and recover.

But if a circuit breaker doesn’t act and new requests keep going to the instance, that instance may completely fail. That forces all the requests to go to other instances. If those instances were already near capacity, the new requests may overwhelm them too and eventually cause them to fail. This cycle continues and eventually the entire distributed system fails.

So far we’ve talked about several resilience strategies, including three forms of load balancing plus timeouts and automatic retries, deadlines, and circuit breakers. Now it’s time to start thinking about how these strategies can be implemented.

When microservices were first being deployed, the most common way to implement resilience strategies was to have each microservice use a standard library that supported one or more of the strategies. An example was Hystrix, an open source library that added resilience features to distributed systems. Developed by Netflix until 2018, Hystrix calls could be wrapped around any call within a microservice that relied on a request to another microservice. Another example of a resilience library is Resilience4j, which is intended for use in functional programming with Java.

Another concern is that relying on libraries means adding call wrappers to every susceptible call in every microservice. Some calls might be missed, some wrappers might contain errors--and having all the developers of all the microservices do things consistently is a challenge. There are also maintenance issues--every new developer who works on the microservices in the future will have to be aware of the call wrappers.

Generally speaking, a proxy sits in the middle of communications between two parties and provides some sort of service for those communications. Proxies often provide some degree of separation between the two parties. For example, party A makes a request to party B, but that request actually goes from A to the proxy, which processes the request and sends its own request to B. A and B don’t directly communicate with each other. 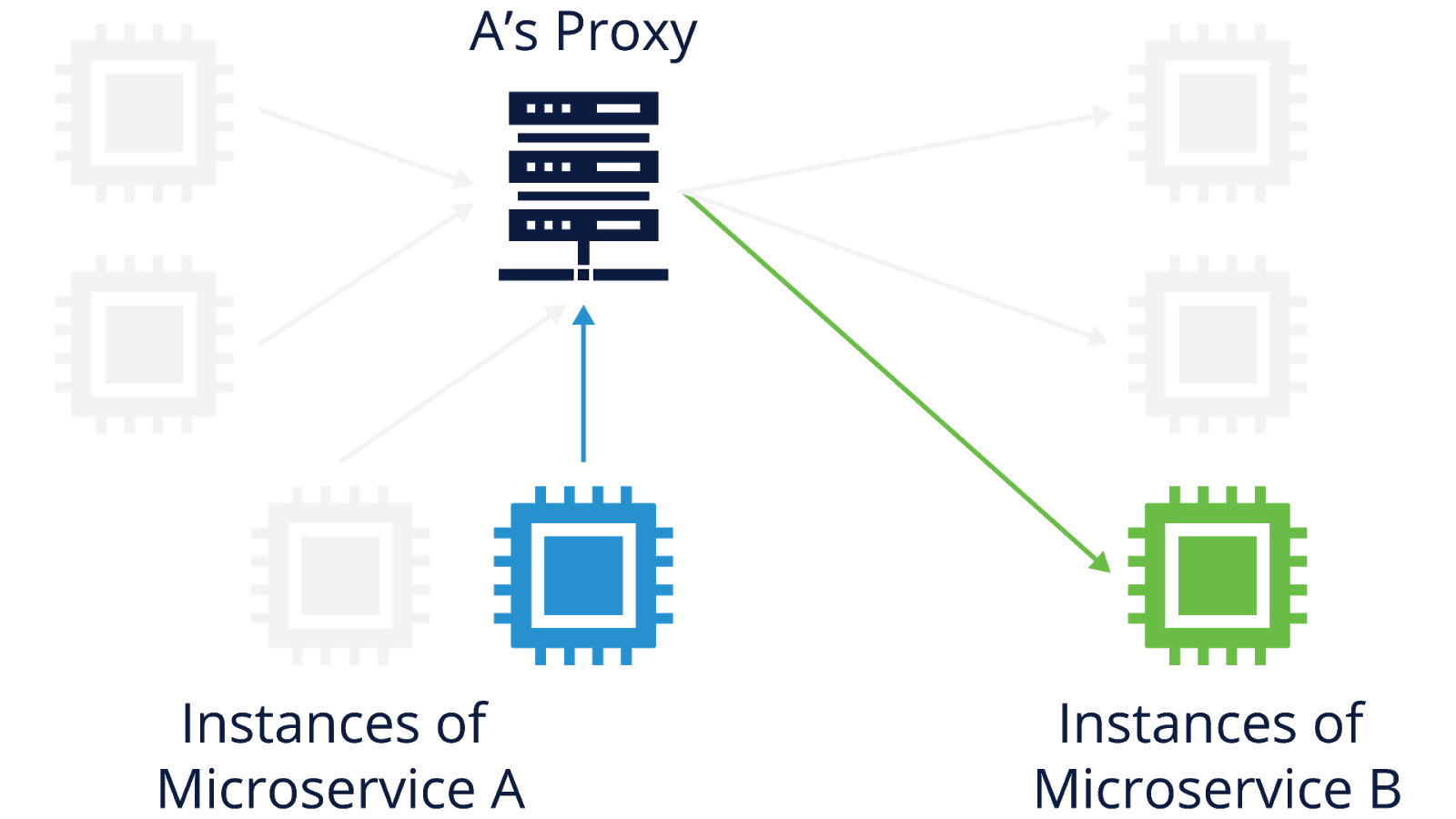 The proxy would monitor for a reply from the B instance, and if the reply was not received in a timely manner, it could automatically retry the request with a different microservice B instance. In the figure, the proxy for microservice A has three instances of microservice B to choose from, and it selects the third one. If the third one does not respond quickly enough, the proxy can use the first or second instance instead.

The primary advantage of proxy-based resilience is that the individual microservices do not need to be modified to use special libraries; any microservices can be proxied.