Creating an intercept did not generate a preview URL

Error on accessing preview URL: First record does not look like a TLS handshake

The service you are intercepting is likely not using TLS, however when configuring the intercept you indicated that it does use TLS. Remove the intercept with telepresence leave [deployment name] and recreate it, setting TLS to n. Telepresence tries to intelligently determine these settings for you when creating an intercept and offer them as defaults, but odd service configurations might cause it to suggest the wrong settings.

If your ingress is set to redirect HTTP requests to HTTPS and your web app uses HTTPS, but you configure the intercept to not use TLS, you will get this error when opening the preview URL. Remove the intercept with telepresence leave [deployment name] and recreate it, selecting the correct port and setting TLS to y when prompted.

Connecting to a cluster via VPN doesn't work.

There are a few different issues that could arise when working with a VPN. Please see the dedicated page on Telepresence and VPNs to learn more on how to fix these.

The cluster probably has access to the host's network and gets confused when it is mapped by Telepresence. Please check the cluster in hosted vm for more details.

Ambassador Cloud needs access granted to your GitHub organization as a third-party OAuth app. If an organization isn't listed during login then the correct access has not been granted.

The quickest way to resolve this is to go to the Github menu → Settings → Applications → Authorized OAuth Apps → Ambassador Labs. An organization owner will have a Grant button, anyone not an owner will have Request which sends an email to the owner. If an access request has been denied in the past the user will not see the Request button, they will have to reach out to the owner.

The organization owner can go to the GitHub menu → Your organizations → [org name] → Settings → Third-party access to see if Ambassador Labs has access already or authorize a request for access (only owners will see Settings on the organization page). Clicking the pencil icon will show the permissions that were granted.

When using GitHub as your identity provider, the first time you log in to Ambassador Cloud GitHub will ask to authorize Ambassador Labs to access your organizations and certain user data. 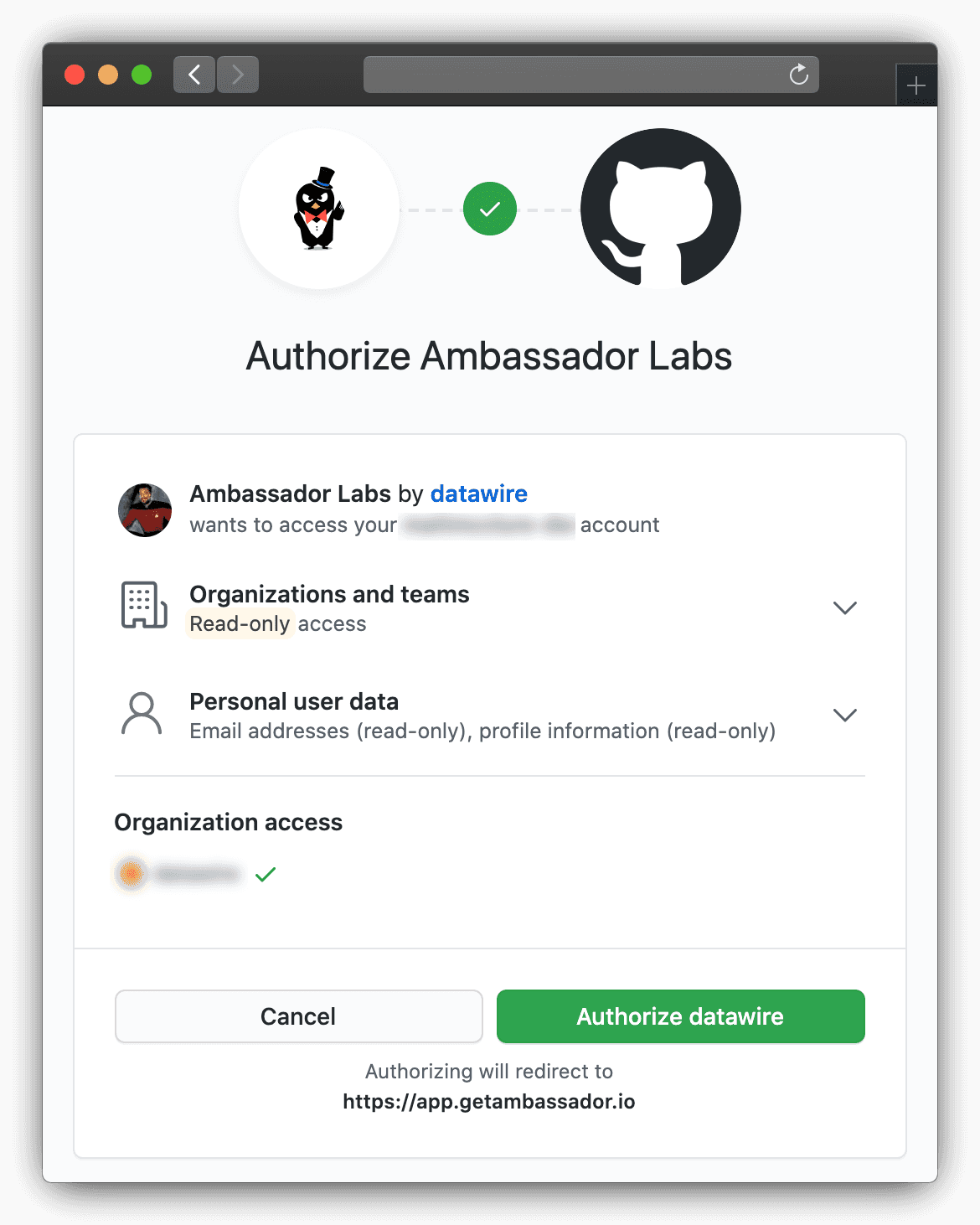 Once approval is granted, you will have to log out of Ambassador Cloud then back in to select the organization.

Volume mounts are not working on macOS

It's necessary to have sshfs installed in order for volume mounts to work correctly during intercepts. Lately there's been some issues using brew install sshfs a macOS workstation because the required component osxfuse (now named macfuse) isn't open source and hence, no longer supported. As a workaround, you can now use gromgit/fuse/sshfs-mac instead. Follow these steps:

Services that require authentication may not function correctly with preview URLs. When accessing a preview URL, it is necessary to configure your intercept to use custom authentication headers for the preview URL. If you don't, you may receive an unauthorized response or be redirected to the login page for Ambassador Cloud.

You can accomplish this by using a browser extension such as the ModHeader extension for Chrome or Firefox.

It is important to note that Ambassador Cloud does not support OAuth browser flows when accessing a preview URL, but other auth schemes such as Basic access authentication and session cookies will work.

Telepresence is a complex piece of software with components running locally on your laptop and remotely in a distributed kubernetes environment. As such, troubleshooting investigations require tools that can give users, cluster admins, and maintainers a broad view of what these distributed components are doing. In order to facilitate such investigations, telepresence >= 2.7.0 includes distributed tracing functionality via OpenTelemetry Tracing is controlled via a grpcPort flag under the tracing configuration of your values.yaml. It is enabled by default and can be disabled by setting grpcPort to 0, or tracing to an empty object:

If tracing is configured, the traffic manager and traffic agents will open a GRPC server under the port given, from which telepresence clients will be able to gather trace data. To collect trace data, ensure you're connected to the cluster, perform whatever operation you'd like to debug and then run gather-traces immediately after:

This command will gather traces from both the cloud and local components of telepresence and output them into a file called traces.gz in your current working directory:

Please do not try to open or uncompress this file, as it contains binary trace data. Instead, you can use the upload-traces command built into telepresence to send it to an OpenTelemetry collector for ingestion:

Once that's been done, the traces will be visible via whatever means your usual collector allows. For example, this is what they look like when loaded into Jaeger's OTLP API:

Note: The host and port provided for the OTLP_GRPC_ENDPOINT must accept OTLP formatted spans (instead of e.g. Jaeger or Zipkin specific spans) via a GRPC API (instead of the HTTP API that is also available in some collectors) Note: Since traces are not automatically shipped to the backend by telepresence, they are stored in memory. Hence, to avoid running telepresence components out of memory, only the last 10MB of trace data are available for export.

An attempt to telepresence intercept results in a timeout, and upon examination of the pods (kubectl get pods) it's discovered that the intercept command did not inject a sidecar into the workload's pods:

If this is occurring in a GKE cluster with private networking enabled, it is likely due to firewall rules blocking the Traffic Manager's webhook injector from the API server. To fix this, add a firewall rule allowing your cluster's master nodes to access TCP port 443 in your cluster's pods, or change the port number that Telepresence is using for the agent injector by providing the number of an allowed port using the Helm chart value agentInjector.webhook.port. Please refer to the telepresence install instructions or the GCP docs for information to resolve this.

The init-container is injected to insert iptables rules that redirects port numbers from the app container to the traffic-agent sidecar. This is necessary when the service's targetPort is numeric. It requires elevated privileges (NET_ADMIN capabilities), and the inserted rules may get overridden by iptables rules inserted by other vendors, such as Istio or Linkerd.

Injection of the init-container can often be avoided by using a targetPort name instead of a number, and ensure that the corresponding container's containerPort is also named. This example uses the name "http", but any valid name will do:

Telepresence's mutating webhook will refrain from injecting an init-container when the targetPort is a name. Instead, it will do the following during the injection of the traffic-agent:

Kubernetes takes care of the rest and will now associate the service's targetPort with our traffic-agent's containerPort.

If the service is "headless" (using ClusterIP: None), then using named ports won't help because the targetPort will not get remapped. A headless service will always require the init-container.

too many files open error when running telepresence connect on Linux