For an overview of other options for gathering statistics on Emissary-ingress, see the Statistics and Monitoring overview.

At the core of Emissary-ingress is Envoy Proxy, which has built-in support for exporting a multitude of statistics about its own operations to StatsD (or to the modified DogStatsD used by Datadog).

If enabled, then Emissary-ingress has Envoy expose this information via the ubiquitous and well-tested StatsD protocol. To enable this, you will simply need to set the environment variable STATSD_ENABLED=true in Emissary-ingress's deployment YAML:

When this variable is set, Emissary-ingress by default sends statistics to a Kubernetes service named statsd-sink on UDP port 8125 (the usual port of the StatsD protocol). You may instead tell Emissary-ingress to send the statistics to a different StatsD server by setting the STATSD_HOST environment variable. This can be useful if you have an existing StatsD sink available in your cluster.

We have included a few example configurations in the statsd-sink/ directory to help you get started. Clone the repository to get local, editable copies.

Using Graphite as the StatsD sink

Graphite is a web-based real-time graphing system. Spin up an example Graphite setup:

This sets up the statsd-sink service and a deployment that contains Graphite and its related infrastructure. Graphite's web interface is available at http://statsd-sink/ from within the cluster. Use port forwarding to access the interface from your local machine:

Emissary-ingress 3.3.0 has an endpoint that has exposes statistics in a format that Prometheus understands natively. If you're using Prometheus, we recommend configuring Prometheus to talk to the :8877/metrics endpoint  directly, instead of instead of going through StatsD and a translator.

To finally get the statistics to Prometheus, you then configure a Prometheus target to read from statsd-sink on port 9102.

You could instead also add the statsd-sink service and Prometheus StatsD Exporter as a sidecar on the Emissary-ingress pod. If you do this, make sure to set STATSD_HOST=localhost so that UDP packets are routed to the sidecar.

It may be desirable to change how metrics produced by the statsd-sink are named, labeled and grouped when they finally make it to Prometheus.

For example, by default, each service that Emissary-ingress serves will create a new metric using its name. For the service called usersvc you will see this metric envoy.cluster.usersvc_cluster.upstream_rq_total. This may lead to problems if you are trying to create a single aggregate that is the sum of all similar metrics from different services. In this case, it is common to differentiate the metrics for an individual service with a label. This can be done by configuring a Prometheus StatsD Exporter "mapping" (not to be confused with an Emissary-ingress Mapping). See Metric Mapping and Configuration in the Prometheus StatsD Exporter documentation to learn how to modify its mappings.

If you deploy Prometheus using Helm the value that you should change in order to add a mapping is prometheusExporter.configuration. Set it to something like this:

If you are using the prom-statsd-sink.yaml example, edit its ambassador-config ConfigMap with your Prometheus mappings, for example:

Make sure that the ServiceMonitor is in the same namespace as Emissary-ingress. A walk-through of the basics of configuring the Prometheus Operator with Emissary-ingress is available here.

Ensure STATSD_ENABLED is set to "true" and apply the YAML with kubectl:

Wait for a minute after the pods spin up and then access the Prometheus dashboard by port-forwarding the Prometheus pod and going to http://localhost:9090/ on a web-browser. 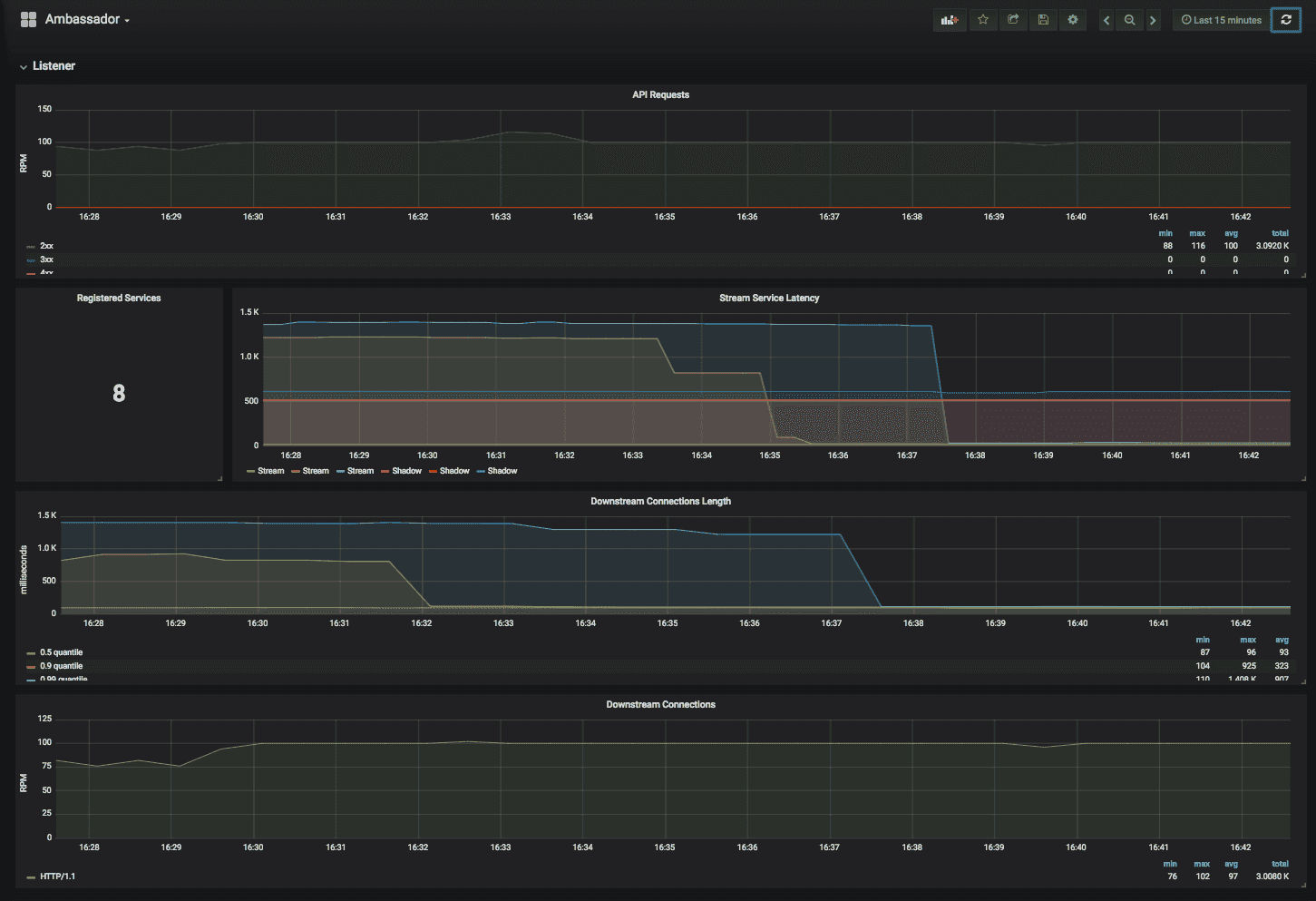 If you're using Grafana, Alex Gervais has written a template Emissary-ingress dashboard for Grafana that works with either the metrics exposed by the Prometheus StatsD Exporter, or by [the :8877/metrics endpoint].

If you are a user of the Datadog monitoring system, pulling in the Envoy statistics from Emissary-ingress is very easy.

Then, you will need to deploy the DogStatsD agent in to your cluster to act as the StatsD sink. To do this, replace the sample API key in our sample YAML file with your own, then apply that YAML:

This sets up the statsd-sink service and a deployment of the DogStatsD agent that forwards the Emissary-ingress statistics to your Datadog account.