Cloud native applications are often composed of various microservices. More often than not, these microservices work interdependently and communicate with each other to process larger business requests.

Because of this multi-directional, service-to-service communication that happens between microservices, it is crucial to perform integration testing on microservices before deploying any changes because unit testing alone doesn't always provide guarantees about the behavior of the application in the target environment (for interested readers, “Why do Integration Testing?” has more details.)

Performing integration testing in this context naturally involves running multiple services and connecting to (potentially remote) middleware and data stores. This requires techniques and tooling that make it challenging - From limited resources and inconsistent data between production and non-production environments; to managing distinct configuration for separate environments to the pain of managing service versioning, releases, and deployment cycles.

Why is integration testing challenging in Kubernetes?

Challenges with integration testing in a new (per developer) K8s cluster

Given the usual process of integration testing in a cloud native app (code → package image → push to docker registry → deploy to K8s cluster), a lot of time is spent waiting for containerized changes to an application (docker image) to be deployed to a cluster before any testing can commence.

How can we speed up the dev loop by eliminating the need to wait for containerized changes to your application to be deployed before testing can commence? By using a Kubernetes tool called Telepresence!​

When using Telepresence you can remain within your rapid inner dev loop of code-build-verify while still testing against real dependencies (not mocks or stubs) -- this effectively “shifts left” your ability to perform integration testing earlier in your development loops.

Telepresence is a CNCF sandbox project that enables you to connect your local development machine to a remote cluster via a two-way proxying mechanism. This empowers you to develop services locally and still test integrations with dependent services or data stores running in the remote cluster.

You can “intercept” or “re-route” any requests made to or traffic sent by a target Kubernetes workload, and code and debug your associated service locally using your preferred local IDE and in-process debugger. You can test your integrations by making requests against the remote cluster’s ingress and watching how the resulting internal traffic is handled by your service running locally.

How does it work?

Telepresence installs a traffic-agent sidecar next to your existing application running in the remote cluster. This traffic agent supports one or more intercept mechanisms that it uses to decide which traffic to intercept.

This creates a workflow where:

So instead of having to build, deploy, and roll back if there’s an issue, you can create an intercept to check how it’s working. If it doesn’t work, you can still make the code changes with the intercept in place. 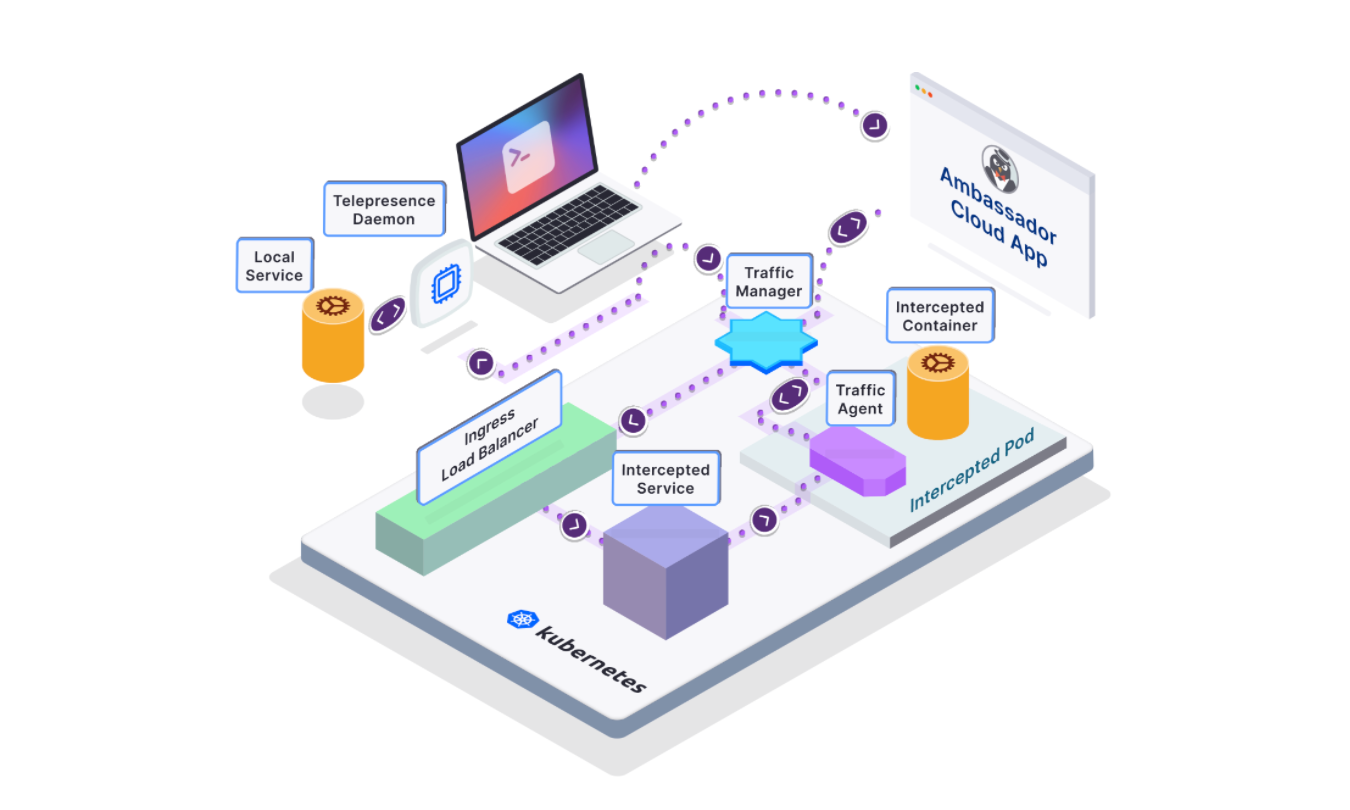 How to use Telepresence for integration testing

Installing the Telepresence CLI on your local machine is the first step you need to take to start using Telepresence. We have different installation options for GNU/Linux, macOS, and Windows users here.

To confirm Telepresence is working as expected, let’s connect to the Kubernetes API server using:  curl -ik https://kubernetes.default and see if we would be able to contact it.

As you can see, it returned a 401 response, and although this is an error this signifies that we could actually contact the remote K8s PI thanks to Telepresence.

Now that you’ve confirmed Telepresence is working, let’s create a personal intercept that will tell Telepresence to reroute or send traffic to the service running in your local development environment instead of the service in the remote cluster.

After you’ve intercepted the service, Telepresence will talk to Ambassador Cloud to generate a "preview URL" for you. This preview URL is set up such that traffic going through that URL gets intercepted and sent to your local environment.

For Telepresence to create this preview URL, it needs to know how cluster ingress works for your service. So, you will be required to answer the following questions on your terminal:

After answering the questions above, a preview URL will be generated for you:

Copy the preview URL printed on your terminal and access it on your browser to see that your local service is now processing the request. 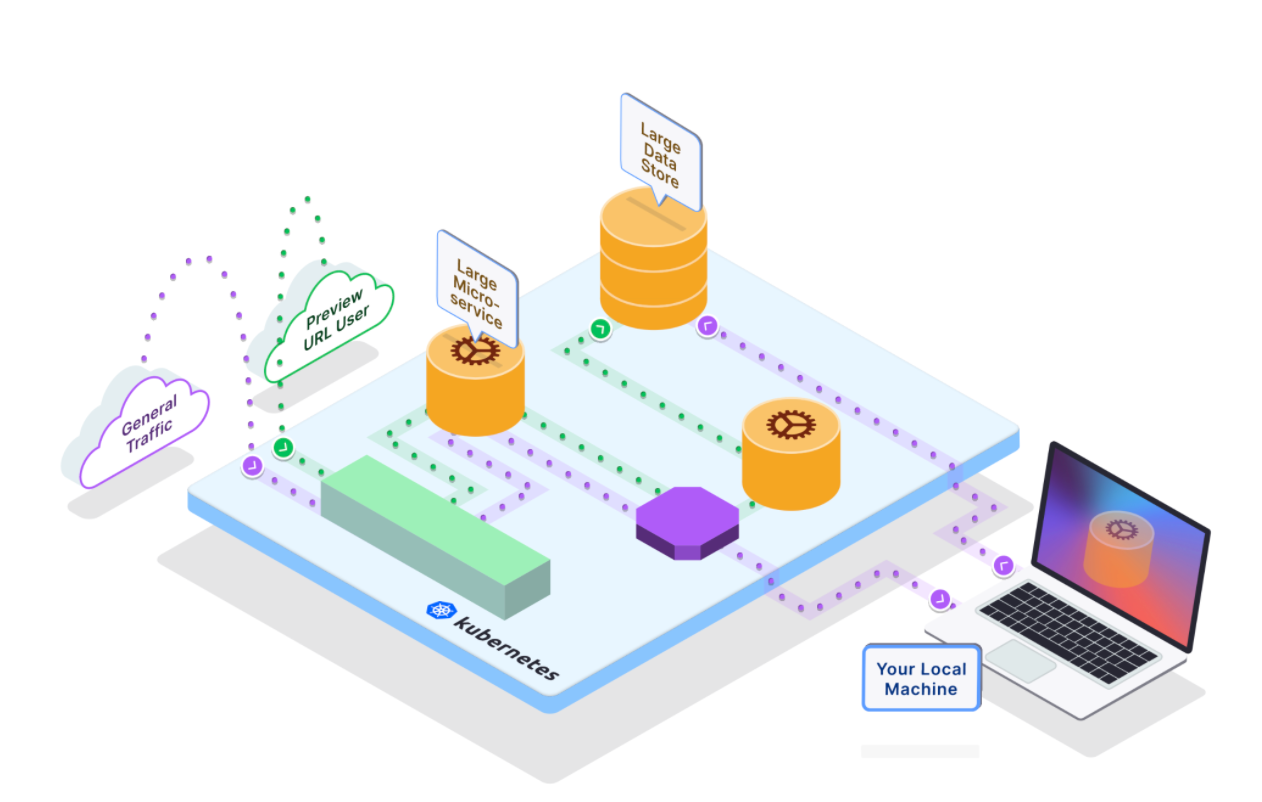 With this, you can now make changes and see them reflected when interacting with your Kubernetes environment, query services only exposed in your cluster's network, and even set breakpoints in your IDE to investigate bugs. Amazing right? We know!

You can also share this preview URL with your teammates or engineering manager to review your changes.

If you want to see Telepresence in action without committing any of your own resources (cluster or services), try it out in <3 minutes using one of our demo clusters with this quickstart guide.​

Any testing strategy should aim to provide coverage to both each layer of a microservice-based application stack and also between the service layers while remaining lightweight.

Unit testing alone doesn't offer guarantees about the behavior of Cloud-native applications as this type of application is typically composed of many microservices that communicate with each other. Performing integration testing in addition to unit testing is always the way to go.

Leveraging the CNCF Telepresence tool allows developers to do real-world testing of microservices at scale, without the overhead of maintaining (and paying for) separate dedicated test clusters/environments, constant container builds & rollouts, and possible disruption failures in running clusters.

If you have any questions or want to know more about us, send us a message on the #Telepresence Slack channel or visit our website. But first of all, give Telepresence a try to see if it does the trick for you as well.