A cloud-native app has been designed and written specifically to run in the cloud and take advantage of the properties that this type of infrastructure has. An organisation can consider itself “cloud-native” when it has also adopted supporting DevOps workflows and practices in order to enable greater agility, increased speed, and reduced issues for both the app and the organization itself.

Cloud-native applications are often packaged and run in containers. The underlying cloud infrastructure often runs on shared commodity hardware that is regularly changing, restarting, or failing. This means that a microservice should be designed to be ephemeral in nature. It should start up quickly, locate its dependent network services rapidly, and fail fast.

Dividing an app into numerous microservices increases its flexibility and scalability, but the potential downside is a reduction in availability due to the app’s increased complexity and more dynamic nature. There are also concerns about the app’s security and observability--being able to monitor its state--when an app is divided into more pieces. You can learn more about ways to address these concerns here.

If an organization wants to become cloud-native, this doesn’t just mean that all of their applications have been designed and written specifically to run in cloud environments. In addition, it also means that the organization has adopted development and operational practices that enable agility for both the app and the organization itself.

The cloud-native app architecture evolved in response to many of the common bottlenecks that slow down the development and release of monolithic applications, namely avoiding code “merge hell” that follows from a large number of engineers working around a single codebase, enabling independent release of individual services, and providing a limited area to investigate -- a blast radius -- when a component does fail. The cloud-native approach enables development and operational staff to rapidly make localized decisions related to their defined responsibilities and carry those decisions out.

DevOps workflows bring together software development and operations in order to enable faster, more frequent software releases that have a lower rate of failure, with the goal of achieving the principle of continuous delivery.

In common cloud-native app architectures, apps are typically written as a number of independent microservices, each one performing a different function. The microservices are deployed and run within container technologies in the cloud. The microservices communicate with each other across the cloud in order to collectively provide the app’s functionality, working together to form a distributed system.

The diagram below shows two examples: a single-service app, and a cloud-native app made up of three microservices. The single-service app is depicted by a pie, reflecting that the app is a single entity that must be made as a whole. The cloud-native app is depicted as cupcakes, meaning that each cupcake (microservice) is independent of the others and can have a different recipe (language, etc.).

Most microservices are also designed to be ephemeral, meaning that they can safely and rapidly stop and start at an arbitrary time. For example, an underlying virtual machine that a service is running on may restart, which in turn triggers a restart of all the processes and applications running on that VM. 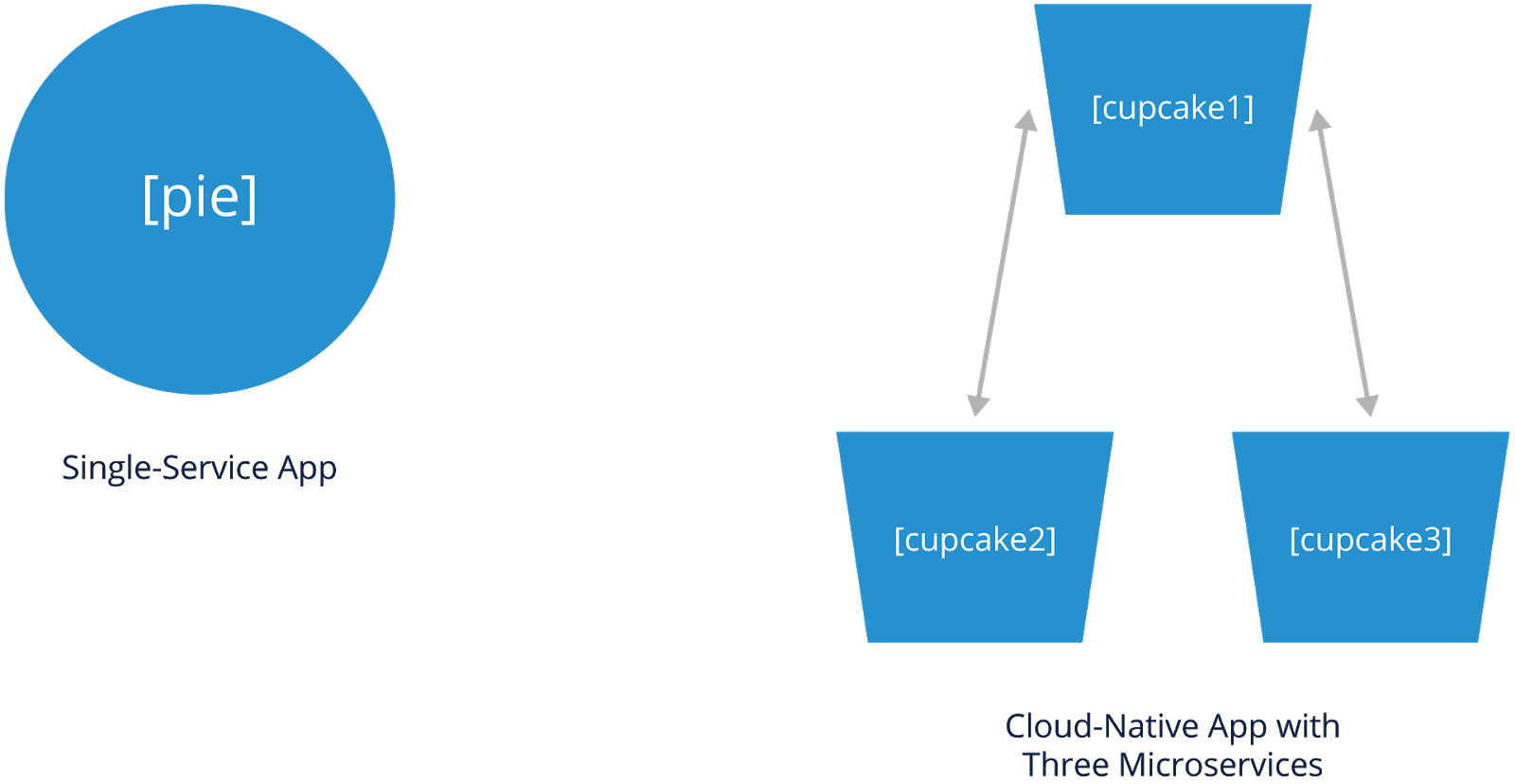 From a developer viewpoint, the primary benefit of cloud-native apps over other apps is that each part of the cloud-native app can be developed and deployed separately from the others. This enables faster development and release of apps. Also, returning to the pie versus cupcake analogy, in cloud-native apps each microservice can be customized and tailored to meet specific needs. Customizing one cupcake doesn’t affect the others.

To illustrate benefits for developers, let’s look at two scenarios.

Scenario 1: Suppose that a cloud-native app consists of 10 microservices, with each microservice developed by a different team and loosely coupled with the other microservices. If one of those teams wants to add a new feature, it revises its microservice, and then the updated microservice can be shipped immediately, thus achieving continuous delivery.

The same is true for all teams in this scenario, so no team will be delayed because they have to wait for another team working on something unrelated.

Scenario 2: Suppose that a single-service app provides the same functionality as the cloud-native app from Scenario 1. Ten teams develop parts of the single-service app. If one of those teams wants to add a new feature, it has to wait until the next scheduled release of the app, which is dependent on the other teams completing their current development work whether or not their work is related to the first team’s.

For the first team, there could be a delay of days, weeks, or months before their new feature finally ships. Delays from one team will affect all other teams--one team falling behind schedule could hold up all others from releasing their new features.

The Fallacies of Distributed Computing

As we mentioned earlier, cloud-native applications are typically decomposed into individual microservices. This decomposition of business logic results in a distributed system, as the microservices need to communicate with each other over a network in order for the application to function.

Decades ago, Peter Deutsch and his colleagues at Sun Microsystems created a list of the fallacies of distributed computing. (https://web.archive.org/web/20160909234753/https://blogs.oracle.com/jag/resource/Fallacies.html) It pointed out that people often make incorrect assumptions when they transition from non-distributed to distributed models.

Cloud-native apps--and the cloud, for that matter--didn’t exist when that list of fallacies was compiled. Several of those fallacies are potentially relevant to cloud-native app adoption today, including the following:

- “The network is reliable.

- The network is secure.”

Things can and will go wrong with any app, but there are more opportunities for failures with distributed apps than non-distributed ones.

Let’s take a closer look at some of the common challenges cloud-native apps can pose.

The first of these challenges is being able to find all the microservices that are dynamically deployed. As microservices are migrated from one place to another and additional instances of microservices are deployed, it becomes increasingly difficult to keep track of where all the instances are currently deployed at any given time. This challenge is commonly referred to as service discovery.

A second challenge involves security and observability. Cloud-native apps are inherently more complex. This makes them harder to secure, because they have larger attack surfaces and more logical pieces to protect. This also makes it harder to monitor how the app is operating and understand what’s happening when things go wrong, especially for app debugging purposes.

Take another look at the diagram we examined earlier, and think about it in the context of each of these challenges.