The implementation of an effective authentication strategy is vital to any application's security solution, as it is a key part of determining a user's identity, and stopping bad actors from masquerading as others, particularly within parts of your system that access sensitive data.

Typically with web applications, the authentication is implemented at the edge, either via an API/edge gateway or via a top-level request filter within your application framework. It is also increasingly common for applications to use external identity providers -- such as Google, GitHub, or Facebook -- typically via an Identity hub like Auth0, Keycloak or Okta that provides authentication-as-a-service, rather than taking on the high cost (and risk) of maintaining their own identity database.

This article is focused on implementing authentication at the edge with the Kubernetes-native Ambassador Edge Stack and shows an example of how to integrate this with third-party identity providers.

How Ambassador Edge Stack Integrates with OAuth and OIDC

This is what the authentication process looks like at a high level when using Ambassador Edge Stack with Auth0 as an identity provider. The use case is an end-user accessing a secured app service. 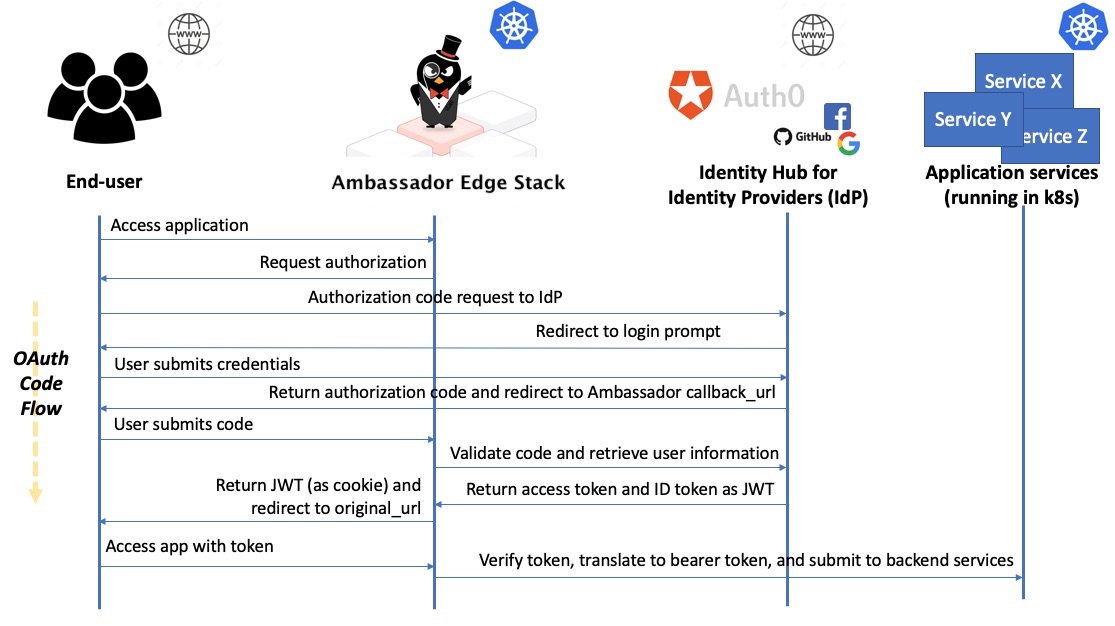 There is quite a bit happening in this diagram, and so it will be useful to provide an overview of all of the moving parts.

In software development, we are generally not shy about using lots of acronyms, and the authentication space is no different. There are quite a few acronyms to learn, but the underlying concepts are surprisingly simple. Here's a cheat sheet:

If you look back at the authentication process diagram, the function of the entities involved should now be much clearer.

Why Use an Identity Hub like Auth0 or Keycloak?

Using an identity hub or broker allows you to support many IdPs without having to code individual integrations with them. For example, Auth0 and Keycloak both offer support for using Google and GitHub as an IdP.

An identity hub sits between your application and the IdP that authenticates your users, which not only adds a level of abstraction so that your application (and Ambassador Edge Stack) is isolated from any changes to each provider's implementation, but it also allows your users to chose which provider they use to authenticate (and you can set a default, or restrict these options).

Learn More With the Ambassador Edge Stack and Auth0 Tutorial

You can learn more from the Single Sign-On with OAuth & OIDC tutorial, which also contains a full walkthrough of how to configure Ambassador Edge Stack with Auth0.

Edit this page on GitHub